Tropical Depression Nine is located in the Caribbean Sea, and will soon become a tropical storm.It could track near Jamaica, the Cayman Islands and western Cuba early next week, possibly as a hurricane.It could become a major hurricane threat for Florida and the eastern Gulf of Mexico.After that, it could track near the coast or inland of the East later next week. Interests in those areas should have their hurricane safety plans ready to go.

Tropical Depression Nine is tracking through the Caribbean Sea and may become a serious hurricane threat for the northwestern Caribbean and Southeast U.S. next week, including Florida.

W​e are still in the very early stage of tracking this latest system. There are aspects of the forecast in which we have more confidence, while others remain uncertain, which is typical for tropical forecasting this far out in time.

H​ere's a look at everything we know right now.

T​ropical Depression Nine is located in the central Caribbean Sea and is moving west-northwest.

Heavy rain is the main threat from this system right now in Aruba, Bonaire, and Curacao. Flash flooding and mudslides are possible in these areas.

(The icon shows the location of the system's center.)

T​he system is forecast to become a tropical storm later today or tonight.

I​t would be named either Hermine or Ian depending on if it or another system in the far eastern Atlantic becomes a tropical storm first.

T​his future tropical storm is forecast by the National Hurricane Center to become a hurricane in the northwest Caribbean by late this weekend or early next week. Rapid intensification is possible during that time, which means a wind speed increase of at least 35 mph in 24 hours or less.

It could then be located anywhere from the eastern Gulf of Mexico to near the Florida Peninsula as a major hurricane (Category 3 or stronger) by next Tuesday or Wednesday.

(The red-shaded area denotes the potential path of the center of the tropical cyclone. It's important to note that impacts (particularly heavy rain, high surf, coastal flooding, winds) with any tropical cyclone usually spread beyond its forecast path. )

Lower wind shear and an ample supply of warm, deep water in the Caribbean Sea are factors expected to contribute to the system's strengthening in the coming days.

L​and interaction with Cuba could be a slight hindering factor to its development before any potential approach to the eastern Gulf of Mexico or Florida early next week.

I​nterests in Jamaica, the Cayman Islands and Cuba should monitor the forecast for this system closely.

F​looding rain could at least be a concern in these areas starting this weekend. Tropical storm or even hurricane conditions could also occur depending on the exact track and strength of this system.

Unlike what we've seen with hurricanes Earl and Fiona, this system's forecast steering winds make it a significant threat to the mainland U.S. next week.

T​he majority of computer forecast models curl the system to a location somewhere from the eastern Gulf of Mexico to near Florida or even off Florida's Atlantic coast in the Tuesday to Wednesday timeframe. It could be at hurricane strength as it tracks near these areas.

(​MORE: What You Should Know About Spaghetti Model Forecasts)

T​hat said, a stalled front will keep South Florida stormy this weekend, and bands of heavier rain well ahead of the system could arrive in southern Florida as soon as Monday.

(The lines on this graphic represent several of the many track forecasts from various computer models. This is not an official forecast, but these are used as guidance for creating the projected path.)

T​his system will then either move inland somewhere over the Southeast U.S., or could track near or along parts of the Eastern Seaboard later next week.

I​t's far too soon to tell where this system will end up, but there could be wind, flooding rain and other impacts extending into other parts of the East late next week.

F​or now, all interests near and along the Gulf Coast, including Florida, and in the Eastern U.S. should monitor the forecast and make sure hurricane plans are in place, in case they are needed.

C​heck back with us at weather.com for the very latest on this developing situation.

12 Things You May Not Know About Your Hurricane Forecast

The Weather Company’s primary journalistic mission is to report on breaking weather news, the environment and the importance of science to our lives. This story does not necessarily represent the position of our parent company, IBM. 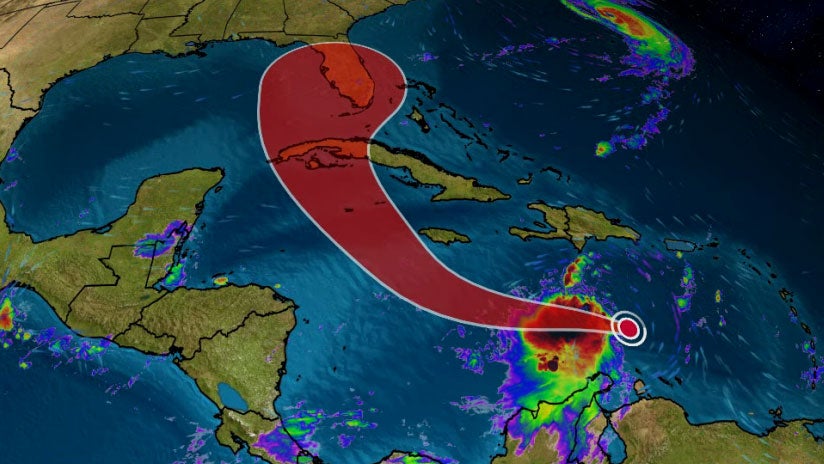 via: The Weather Channel.

Depression forecast to turn into Hurricane Hermine, with Florida in the cone. Tropical Depression Nine formed in the Caribbean on Sept. 23, 2022. The National Hurricane Center expects to significantly strengthen and make landfall somewhere in Florida.

1. Tropical Depression 9 could slam into Florida as a major hurricane