A remarkable rally lifted the Phillies to a desperate win Wednesday night, ending a brutal five-game losing streak and helping them hold ground in the fight to maintain the NL's final playoff spot.

After being asleep at the wheel in Atlanta and faltering in bizarre fashion Tuesday, the Phils completed an epic comeback with late inning heroics to keep them in the driver's seat with a little bit of cushion with 14 games left in the regular season.

A scoreless tie in Game 2 was finally broken on a Vladimir Guerrero Jr. 8th inning three-run homer (following a bad Bryson Stott error). The Phillies followed with a rally to score three runs to tie it in their half of the eighth thanks to a Realmuto homer and two small-ball RBI singles.

After an uneventful 9th, the Phillies let the Jays load the bases and got out of a jam by the skin of their teeth.

And then after a leadoff bunt Philly loaded the bases in their part of the 10th, setting up a walkoff single for Matt Vierling (who went 5-for-5 on the night).

Here's what else we saw from the Phillies in their series tie to the playoff-bound Jays:

• Tuesday's disaster is worthy of its own bullet point, as the Phils scored 11 runs but lost 18-11 in a game that eventually saw back up catcher Garrett Stubbs throw a 39 MPH pitch before earning a strikeout to end the 9th inning. Kyle Schwarber hit homer No. 40 and the offense came to play — but as an 18-run outing suggests the pitching staff was pretty awful. And it was.

• Luckily there was some contrast in Wednesday's finale. Zack Wheeler made his return to the mound and it couldn't have been a better time for a confidence-inspiring performance. Limited to four innings out of caution, Wheeler retired all but two batters and drew mostly groundouts. He was efficient and interestingly, his stuff looked even better than it did before his sore elbow:

The priority with Wheeler appears to be having him fully stretched out for a potential Game 1 playoff start. He will have two more starts to get himself there. With Noah Syndergaard moved to the pen the Phils were able to get Thor some experience in his potential postseason role as well tossing two scoreless frames and getting a key double play to get out of a jam.

• A night after the Phillies offense smashed 15 hits and 11 runs the Phillies knocked 11 hits again, flexing their offense when Blue Jays starter Kevin Gausmann left the game. But still, the RISP issues continue. A loaded base situation brought up Bryce Harper in the bottom of the fifth and two were on for his next at bat in the seventh but he failed to connect in both of the team's best scoring chances.

Harper has looked good in stretches since returning from a broken thumb but he's not been nearly the same (and his elbow injury has kept him out of the field).

• It's been too long since we paused to talk about how ridiculously good J.T. Realmuto has been this season, and it was brought front and center in the first game in this series against Toronto. The catcher became the sixth player to record a five-hit game during the same game in which he also recorded career hit 1,000 (which he did), 2,000 or 3,000. His 6.1 fWAR at age 31 measures as the sixth best ever for catchers over 31 years old.

If you are not bored of the BCIB accolades, Realmuto is also the sixth catcher in MLB history to have at least 20 homers and 15 steals in a season (he has 18 after nabbing one Wednesday). Two more steals would make him one of two ever with 20 and 20 (joining Ivan Rodriguez in 1999). Many forget about Realmuto's base running because, well, he's one of the best steal stopping catchers in baseball — but he is perfect in theft attempts in 2022.

The catcher had two hits Wednesday as well, one of them a homer in the eighth to start the Phils' late rally to tie things.

Realmuto should make some kind of noise in the MVP vote (he may not get first or second votes but he will get place votes for sure).

• This is just a personal note — the Phils attendance was just over 29,000 Wednesday night and I was there a little early, walking around Ashburn Alley about 10 minutes before the first pitch and there were no lines, none, for Tony Luke's, Campo's and the other typically packed outfield food stands. I remember in another lifetime (at least it seems that way) regular sell outs that made it basically a parking lot in Ashburn Alley prior to a game.

The lack of enthusiasm for the best Phillies team in the city in a decade should be embarrassing to Philadelphia fans. This team controls its own playoff destiny, has the reigning MVP, the best catcher in baseball and the NL home run leader. Yes, they're struggling a bit against good teams down the stretch and yes there have been some injuries that stifled some momentum this year — and the Eagles are back — but this is short-changing a team that probably deserves better. I hope to see the stands packed for the final home series against Atlanta this weekend.

• The Braves come to town fresh off sweeping the Phillies in Atlanta last weekend. Every Phils regular starter (Ranger Suarez, Aaron Nola, Bailey Falter and Kyle Gibson) aside from Wheeler will get a nod in the series.

The Phils have a tentative hold on a playoff spot even though they lost six games in a row — the Brewers beat the Mets earlier Wednesday afternoon and currently stand 2.5 games behind Philadelphia for the final Wild Card spot (with Philly still within striking distance of the Padres for the 5-seed in the NL). However the Phillies need to get in the win column against Atlanta. A four game sweep or even 1-3 series loss could have them out of control of their own playoff destiny for the first time in months.

After the Braves there is thankfully a return to facing lackluster teams again, with series in Chicago and Washington following next week.

This could be a stressful couple of weeks for Phillies fans. 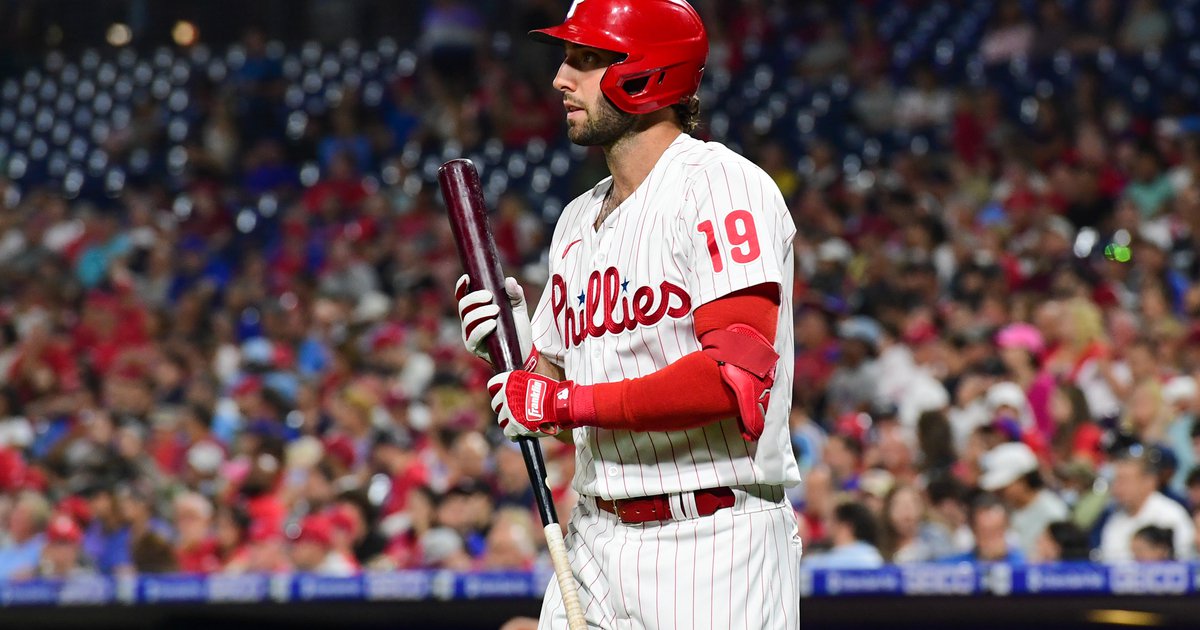