Afforded two opportunities to force overtime, the Patriots came up empty. A sack taken by Mac Jones on third down was followed by a long misfire to Nelson Agholor on fourth and 16 to end the first bid. On the second, the clock ran out after the offense took over with 89 yards and 53 seconds to go.

The Vikings took the final lead in a back-and-forth contest on Kirk Cousins’s third touchdown pass, a 15-yarder to receiver Adam Thielen, with 9:34 to play.

MINNEAPOLIS — The Patriots matched the Vikings score for score for three quarters in a game that was tied at the half and saw the visitors take a lead into the fourth, but from there it was Minnesota that seized control to claim a 33-26 victory.

The special teams certainly contributed to the loss. Minnesota answered a Patriots third-quarter touchdown with a kickoff return for a score and a running into the kicker penalty kept the Vikings’ go-ahead drive alive.

Delivering exclusive analysis and commentary on the Patriots and the NFL right to your inbox, on weekdays during the season.

Rough start for the Patriots as the hosts threw everything but a Vikings ship at them on the opening drive. A little play-action, a little zone running, and a whole lot of Justin Jefferson.

The third-year receiver capped the 80-yard march with a 6-yard touchdown pass from Cousins. Jefferson had two catches for 13 yards and an 11-yard pass to Thielen on the drive as the Minnesota took a 7-0 lead. It was the first touchdown the Patriots had allowed in three weeks.

The New England offense struck back in a hurry, using its hurry-up offense.

It took just five plays (covering 75 yards) to tie it, with Jones hitting Agholor for a 38-yard scoring strike. Agholor got a clean break at the line and nobody in purple saw him down the seam. Jones did, however, and he delivered a bullet.

It was a sigh of relief for an offense that had trouble finishing off drives in the 10-3 win over the Jets Sunday.

The drive did come at a price, however, as Jakobi Meyers hurt his shoulder on his diving 26-yard catch on the first play from scrimmage. He came back later in the half but was clearly limited.

The pace slowed dramatically with both teams going three and out on their second possession.

New England took its first lead courtesy of Cousins, who fired a third-and-10 pass right into Jonathan Jones’s gut and the speedy corner took it back 55 yards to the Vikings’ 17.

The red zone struggles reemerged, however, and the Patriots settled for Nick Folk’s 34-yard field goal for the 10-7 lead.

Minnesota looked poised to regain the lead but its drive stalled in the red zone as well when right guard Ed Ingram was whistled for holding a rampaging Matthew Judon. The Vikings couldn’t convert a third and 15 and Joseph’s 30-yard 3-pointer tied it at 10.

Marcus Jones returned the ensuing kickoff 46 yards and five plays later Folk sailed a 46-yard field goal through the uprights for a 13-10 advantage.

Kevin O’Connell dialed up a little more Jefferson on the next drive and that was a good call. Jefferson caught two passes for 54 yards on a 75-yard march that ended with a 1-yard pass to T.J. Hockenson for 16-13 lead when Joseph blew the PAT right.

With just 90 ticks left in the half, Bill Belichick went back to hurry-up mode. The Patriots drove down the field quickly with Jones completing four straight passes for 67 yards.

A couple of decisions were costly, however. Hunter Henry failed to get out of bounds after a 22-yard catch and Jones took an unnecessary sack, costing the Patriots their final two timeouts.

Jones tried an end zone fade to Kendrick Bourne with 9 seconds left but Duke Shelley got away with pass interference and New England again failed to capitalize in the red zone, settling for Folk’s 23-yarder and a 16-16 tie at intermission.

The Patriots came out of the break with their collective hair on fire — perhaps to counteract the fake snowflakes falling from the stadium sky.

Jones engineered an eight-play, 75-yard drive that took just over four minutes. He finished it off with a 37-yard seam shot to Henry. The tight end was never touched as linebacker Jordan Hicks bit on the play fake and safety Camryn Bynum fell trying to make the tackle.

The key play on the drive that gave the Patriots a 23-16 lead was a 15-yard third down catch by Meyers.

The silenced crowd didn’t stay that way for long.

Kene Nwangwu bolted through the kickoff coverage for 97 yards and the tying score, setting off a wild celebration and yet another Prince song.

And speaking of Prince, there was a little controversy on the next drive.

Henry was originally credited with a 6-yard touchdown catch, but it was overturned on review. Once again a red zone breakthrough ended in 3 points, with Folk’s 25-yarder giving New England a 26-23 lead after three quarters.

Murray active as an offensive lineman

The Patriots elevated Bill Murray to the active roster just hours before the game. Originally signed as an undrafted rookie defensive lineman in 2020, Murray made the switch to offensive line this season and Belichick pointed out recently that Murray was “making progress” at the position. “It’s kind of been in spurts. But lately it’s been good. You know his training’s good. He looks great physically. And, of course, our practices are cut down now, one padded practice a week and that kind of thing. So, the opportunity for those players developmental O- and D-lineman, linebackers, tight ends is just limited. In the line of scrimmage blocking and pass protection, you know all those kinds of things. Receivers and [defensive backs] can run routes and cover and that but the development of the bigger guys in the interior part of the line is just limited. So, Bill does all he can. Nobody works harder than that kid.’’ … The club also re-signed running back J.J. Taylor to the practice squad. 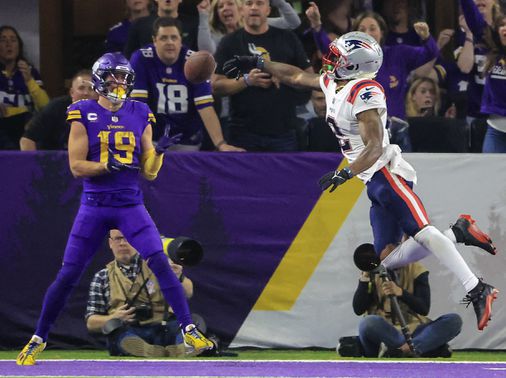 via: The Boston Globe.

1. Four takeaways from the Commanders' 20-17 loss to the Vikings

2. Patriots at Vikings: Keys to game, how to watch, who has the edge

3. Ravens prepare for Tom Brady, one of the most significant