The lexicon of football has historically contained references to war.

Balls are shelled long, aerial battles are won. Midfield generals aim to control the supply lines to the marksmen up front.

But on the day Russian president Vladimir Putin threatened to push the nuclear button in the ongoing conflict in Ukraine, the beautiful game’s place in the wider scheme of things was again placed in proper context.

Football is, as legendary former AC Milan manager Arrigo Sacchi once famously observed, ‘the most important of the least important things in life.’


But it does have an important role to play in times of adversity as we have seen time and again this year.

We saw it back in March when Scotland and Poland met in a hastily-arranged friendly to raise money for Ukraine.

A crowd of 39,090 attended the match with £10 from each ticket going towards UNICEF’s humanitarian response in the war-torn nation.

Then in June the world’s media descended upon Hampden as Ukraine’s first competitive action since the invasion saw their tear-stained players deservedly beat Scotland 3-1 in a World Cup play-off semi-final. They would ultimately fall at the final hurdle in Cardiff against Wales but a special bond had been formed with the Tartan Army.

That was renewed on Wednesday night and outside Hampden Park before kick off, there was an tangible air of solidarity.

Fans wearing half-and-half Ukraine and Scotland scarves greeted each other warmly. They hugged while posing for selfies draped in flags of both proud nations.

And with ‘Peace’ written in English and Ukrainian on the big screens at Hampden, the two teams came out for the national anthems.

Beginning with the lyrics: ‘Ukraine’s glory has not yet died, nor her freedom,’ the visiting fans belted out theirs in fine voice.

At the end the Tartan Army generously applauded the Ukrainian supporters - many of whom are living here to escape the conflict - as blue and yellow flags remained proudly pointed towards the skies above Glasgow.

Sadly, there was not unanimous respect shown during the minute’s applause in honour of the late Queen Elizabeth II.

The applause was generally well supported but boos were audible above the clapping and it set the tone for an eerily quiet atmosphere when the game kicked off.

That was strange because this was a huge match for Scotland, who host Ireland here in the Nations League on Saturday night before rounding off the group by travelling to face Ukraine in neutral Poland on Tuesday.

Should Clarke’s men finish top of Group B1 they would be guaranteed a play-off place for Euro 2024; the exact same route the nation took in reaching Euro 2020, ending a lengthy spell in the international wilderness.

But Scotland would also be second seeds for the draw for the qualifying groups for Germany 2024 when it takes place in Frankfurt next month.

There was so much at stake so, with the special relationship off the park with Ukraine firmly established, could we beat them on it this time?

Clarke’s men were certainly boosted by the fact Ukraine were without captain and talisman Oleksandr Zinchenko.

The midfielder, who left Manchester City to join Arsenal in the summer, put in one of the finest visiting performances here in recent years back in June; alongside Luka Modric’s imperious display for Croatia during Euro 2020.

Zinchenko was one key reason Scotland will be back home watching the World Cup in Qatar while shivering under blankets this winter.

The visitors were also without Hoerhiy Buschan, a goalkeeper so error prone he was memorably described as ‘a pudding’ by Graeme Souness during the play-off back in June.

But in Mykhaylo Mudryk they possess a player with such impressive raw pace he looked capable of leaving scorch marks on the Hampden turf.

Celtic full-back Josip Juranovic has been linked with Atletico Madrid and English Premier League clubs but he endured a torrid evening in the Champions League recently against Shakhtar Donetsk star Mudryk.

Nathan Patterson had a big job on his hands but his night was cruelly curtailed after he stretched for a tackle and seemingly injured his knee.

It was a blow for Scotland and for the young Everton full back who has enjoyed a storming start to the season with Frank Lampard’s Goodison Park side. On came young Brentford defender Aaron Hickey and he put in a strong performance against Mudryk.

Scotland enjoyed a good first half without ever making the breakthrough. But they should have been facing 10 men when Valeriy Bondar wiped out Che Adams before the break as the Southampton striker bore down on goal.

But Scotland were simply superb after the break. As they kept pressing for a goal they did so in the knowledge that every single outfield player who started the game had scored for their country.

If you were to pick who would be the goalscoring hero then John McGinn would have been high on the list.

Sure enough it was the new Aston Villa captain who made the breakthrough.

Kieran Tierney made a challenge at the edge of the box and the ball broke into the path of McGinn.

He used his large posterior to shrug off the close attention of Bondar in the box before turning and firing into the bottom corner of the net.

When Lyndon Dykes twice headed home corners by fellow substitute Ryan Fraser, Scotland had the huge win they craved. Clarke’s men are sitting proudly top of Group B1 and have a great chance of remaining at the summit.

And from the warm reception both sets of players received at full time from the flag-waving Ukraine fans this 3-0 victory has not damaged the special relationship built up between these two nations in 2022. 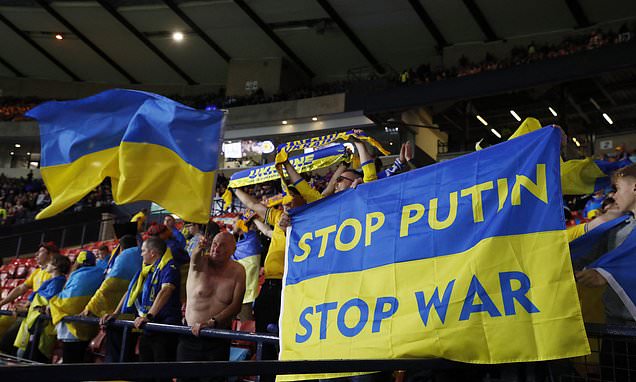 History. Cuba has been one of North Korea's most consistent allies. North Korean media portrays Cubans as comrades in the common cause of socialism. During the Cold War, North Korea and Cuba forged a bond of solidarity based on their militant positions opposing American power.

The England national football team is the joint-oldest in the world; it was formed at the same time as Scotland. A representative match between England and Scotland was played on 5 March 1870, having been organised by the Football Association.

2. Football has forged a special bond between - 15 Minute News

3. Football has forged a special bond between - Granthshala News

4. Football has forged a special bond between Scotland and - Noovell

5. #sports Football has forged a special bond between Scotland and

Tagging: football has forged a special bond between scotland and ukraine during this time of adversity, kevin thomson football manager.