At the 2022 Fifa World Cup, Nico and Iñaki Williams have become the latest siblings to play for two separate teams.

While 20-year-old Nico was picked by Spain, 28-year-old Iñaki this week chosen to represent Ghana.

While the brothers are teammates at Athletic Bilbao –where Iñaki established a record of playing over 200 consecutive games – they are now hoping for a showdown at Qatar.

Above all I’d like to face Ghana,” Nico told AFP in an interview at Spain’s Doha training base, the University of Qatar.

“It’s that sibling rivalry, we always had a bit of needle in the parks when we were little, and I hope we can do it as professionals.”

The Williams brothers would be only the second set of siblings to face each other at a World Cup after Jerome and Kevin-Prince Boateng did in 2010 and 2014 for Germany and Ghana respectively.

While the Boatengs, who played against each other in both tournaments, were born to a Ghanaian father and were raised by separate mothers in Germany, the Williams brothers were born in Spain from Ghanaian parents who made the long journey to Europe looking for a better life.

Let’s take a look at their incredible story:

To make it to Spain, they had to ride on the back of a crowded truck and walk barefoot through the Sahara desert, according to Iñaki Williams. His mother was already pregnant with him when the couple were detained while trying to enter Spain.

A deep bond endures between the brothers, whose parents endured a nightmarish 4,000 kilometre journey from Ghana to Melilla, a Spanish enclave in north Africa.

The route was partly barefoot across baking Sahara terrain, a risk they deemed worth taking to seek a better life.

Maria Williams, their mother, was pregnant with Iñaki at the time and, after her and father Felix Williams were granted asylum in Bilbao, he was born there in 1994.

As per Indian Express, Iñaki was unaware of these details until his mother decided to share it with him – two years after he made his debut for La Liga club Athletic Bilbao.

Iñaki said his mother didn’t know she was carrying him at the time.

“If I knew, I would have stayed,” she told him.

“They did part (of the journey) in a truck, one of those with the open back, 40 people packed in, then walked days,”  added. “People fell, left along the way, people they buried. It’s dangerous, there are thieves waiting, rapes, suffering. Some are tricked into it. Traffickers get paid and then halfway say, ‘The journey ends here.’ Chuck you out, leave you with nothing, no water, no food. Kids, old people, women. People go not knowing what’s ahead, if they’ll make it.”

Maria and Felix eventually received political asylum after taking advice from a charity worker who told them to say they had fled a civil war in Liberia.

The couple moved to the Basque Country region where both boys were born. It didn’t take long before Iñaki joined the youth academy of first-division club Athletic. Nico later followed in his footsteps.

The brothers are among the few Black players to ever play for Athletic, the traditional Spanish club that signs local-born players or those who have come through the soccer academies of teams in the Basque region.

“Seeing the suffering of my parents, what they have gone through, it makes you think about things more, you don’t have this mentality that maybe a 20-year-old has. They have given everything for us, my brother and I, suffered a lot for us, above all for me, (Iñaki) had it a bit worse than me. My brother is protective of me, he wants to help me, and because of that I am the person that I am today,” Nico said.

In Spain, Iñaki is a legend – having played 236 straight matches for Athletic Bilbao, making 286 appearances scoring 80 goals and 48 assists, as per Indian Express.

But he’s been overlooked by the national team, having played just one friendly in 2016.

Iñaki in July declared his international allegiance for Ghana in July, and Nico earned his first cap under coach Luis Enrique in September.

Nico, who was raised in part by Iñaki because their parents often had to be out working, was a surprise late addition. He made his debut in a Nations League match against Switzerland, and in his second appearance coming off the bench, the youngster set up a goal by teammate Álvaro Morata to send Spain into the last four.

Fearsome on the right flank for his club, Nico credits his brother with helping him find his footing at football’s top level.

“Always,” said Nico, when asked if Iñaki gave him advice.

“An older brother has to, and I’m very happy with his advice, I enjoy playing more because of it.”

In the absence of Iñaki, Nico says it is Barcelona lynchpin Sergio Busquets who helps him with Spain, as well as other veterans like Cesar Azpilicueta and Dani Carvajal.

Given Iñaki only Spain appearance came in 2016, and Nico is just starting his professional career, until recently it seemed unlikely either would feature at this World Cup, let alone both.

“The truth is that we could never have imagined that we would reach this level, two brothers playing for the same club, each one in a national team and at a World Cup,” said Nico.

“In life this situation happens rarely, and my family is very happy and proud that we are here.”

Nico believes Iñaki deciding to go his own way and play for Ghana was “a respectable decision” but he was always determined to play for Spain, even if it happened quicker than he could have imagined.

“I always knew that I wanted to be here, to be part of the Spanish national team,” said Nico. “It caught me out a bit, the call from Luis Enrique, I’m a very young kid, things have moved quickly and I didn’t expect it.”

There are a few examples of siblings playing for the same national team in World Cups, including the three Palacios brothers with Honduras in the 2010 tournament.

Ghana had brothers Andre and Jordan Ayew — sons of three-time African player of the year Abedi Pele — play together at the 2014 World Cup, and they will be back to play in Qatar this month.

Ivory Coast played with Yaya and Kolo Toure in 2010 and in 2014, while Jonathan and Giovani dos Santos played for México in 2018, as did Eden and Thorgan Hazard for Belgium.

Twins Frank and Ronald de Boer were in the Dutch team in the 1994 and 1998 World Cups, reaching the semi-finals in 1998. Another pair of Dutch twins — Rene and Willy van de Kerkhof — made the final twice, in 1974 and 1978, both times coming up short of the title. Erwin and Ronald Koeman were not twins but in 1990 also played with the Netherlands.

The Danish national team had Brian and Michael Laudrup in the 1998 tournament, while England counted on Jack and Bobby Charlton in the 1966 and 1970 World Cups.

Spain and Ghana are in different groups in Qatar, so the Williams brothers won’t be able to play against each other at least until the quarterfinals.

“Hopefully it will happen,” Iñaki said, “and that Ghana wins…”

“We’ll see about that,” Nico said. “But for sure we will be exchanging shirts after the match.”

With inputs from agencies 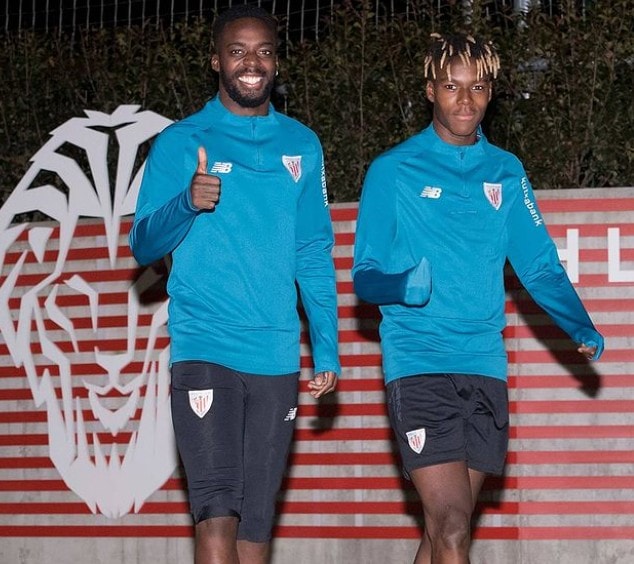