In director J.D. Dillard’s historical drama, Jonathan Majors plays real-life hero Ensign Jesse Brown, the first Black man to complete the basic flight training program in the US Navy. Brown was also the first Black naval officer to die in the Korean War. That his story isn’t more widely known speaks to how history was, and continues to be, whitewashed to a deceptive sheen.

To be the first person to do something is a lonely honor, especially if one is a minority. In the segregated era in which “Devotion” takes place, just the basic human desire to better oneself could result in violence if you were Black. Once that hurdle of being “the first” is cleared, you become “the only,” which in many ways feels lonelier.

“Devotion,” which opens in Boston theaters Nov. 23, serves as a rousing, heartbreaking corrective.

Glen Powell, who plays fellow Navy hero and Brown’s friend Lieutenant Junior Grade Tom Hudner (a native of Fall River who became a commissioner of the Massachusetts Department of Veterans’ Services), is also a co-executive producer and helped shepherd this adaptation of Adam Makos’s 2015 book, “Devotion: An Epic Story of Heroism, Friendship, and Sacrifice” to the big screen. The screenplay by Jake Crane and Jonathan Stewart avoids most of the pitfalls of interracial friendship movies. The two protagonists are fully drawn characters, and Brown is not seen through Hudner’s gaze.

Jonathan Majors in a scene from "Devotion."

Dillard was a fitting choice to direct, as he not only is a Navy brat, but his father was the second Black Naval officer to fly for the Blue Angels. As such, the aerial sequences feel technically proficient and are thrilling to watch. Brown and Hudner initially bond over an exciting flight detail that finds them flying dangerously close to the ground and over a house we’ll later discover belongs to Brown.

When he visits the house on land, Brown’s wife, Daisy (Christina Jackson), tells Hudner that her husband must like him, because other than fellow pilot Carol (Nick Hargrove, playing the requisite tragic, inexperienced pilot character), no one has been invited inside her home. She also tells him that while she’s Brown’s protector on the ground, Hudner must assume that role in the air. Brown’s other comrades, including one played by Joe Jonas (who also sings the end credits song), assist as well.

Jackson stretches a thankless role into something credible. She and Majors have the easy rapport of two people in love, and her humor is a nice balance to his stoicism. Granted, she gets the scene that assuages any guilt white audience members may be feeling, but she and Powell handle it so well that I was too busy wiping my eyes to care.

Racism is everywhere, so there are the usual infuriating scenes of Brown having to confront idiots. But “Devotion” finds more strength in the subtle changes in Majors’s body language as he tries to suppress his rage. There’s an easily missed line of dialogue where Brown mentions that an officer wouldn’t pin his Naval Aviator Badge on him after he aced his final test (a test he was forced to repeat despite numerous passing results). There’s also an altercation that stems from Brown receiving attention from, of all people, Elizabeth Taylor (a convincing Serinda Swan).

What stuck with me most, however, were the scenes where Brown looks in the mirror and delivers a bitter stream of brutal invective. He has written down every single racist and offensive thing that’s been said to him as he climbed the ranks. His notebook (which should be a hell of a lot bigger) sounds like a screenwriter’s invention, but as a symbolic device it’s quite powerful.

Because every Black person remembers it all — each slight, every utterance of the N-word. Majors, who radiates resolve from every pore, effectively conveys how this exercise only strengthens and motivates Brown. We all put on our suits of armor before going out in the world, whatever they are made of, and this bit of business played like “Devotion” was sharing a well-known, but well-kept secret.

The third act depicts the Korean War’s Battle of Chosin Reservoir that would cost Brown his life in December 1950. Hudner’s rescue attempt would seem like a studio system Hollywood’s war picture propaganda if it weren’t actually true. The actors’ last scene was met with audible gasps and sniffles from the audience at my screening.

Though it hits all the expected beats, it’s the attention to the little details that makes “Devotion” take flight.

Odie Henderson is the Boston Globe's film critic. He can be reached at [email protected] Follow him on Twitter @odienator. 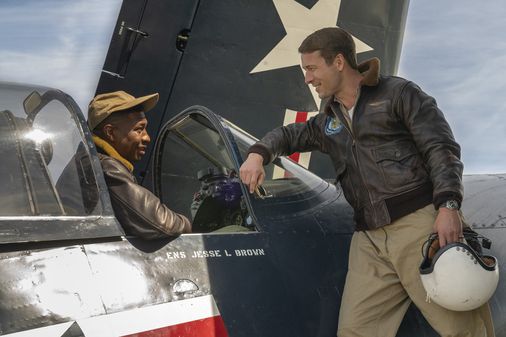 via: The Boston Globe.

Waiting for his friend to arrive, Van Gogh painted a series of pictures of sunflowers to brighten his friend's bedroom. They were meant as a sign of friendship and welcome, but also of Vincent's devotion to Gauguin as his artistic leader.

2. Where to Find Swarm of Flies in Elden Ring - SegmentNext

3. Where to Find the Swarm of Flies in Elden Ring - DBLTAP