The search inside Texas' largest zoo was focused on scouring trees, which clouded leopards like to climb

Officials said the animal, weighing between 20 to 25lb is 'not dangerous' and likely hiding on zoo grounds

A missing clouded leopard shut down the Dallas Zoo on Friday as police helped search for the animal that officials described as not dangerous and likely hiding somewhere on the zoo grounds.

The small cat, named Nova, weighs about 20 to 25lbs, said Harrison Edell, executive vice president of animal care and conservation at the Dallas Zoo. The search inside Texas' largest zoo was focused on scouring trees, which Edell said clouded leopards like to climb.

The zoo tweeted that the missing cat, named Nova, was a 'serious situation,' but Edell said the animal posed no threat to humans.

'If anything, she's real nervous and afraid of people,' Edell said.

He did not say how the animal escaped its enclosure, but caretakers had discovered a tear in the mesh of the enclosure, Fox29 News reported.

Another clouded leopard at the zoo, Nova's sister named Luna, was still in its habitat. He said Nova is very attached to her sister and her territory, and expects that the animal did not go very far.

'At this point, we've spent much of the morning searching zoo grounds and we continue to hunt for her. It is working to our advantage that it is winter so there's not a lot of tree cover right now. So that's going to make it a little bit easier for us to find her,' he said.

On Friday, the Texas zoo tweeted that they were closed due to a 'serious situation.' 'We have an ongoing situation at the Zoo right now with a Code Blue -- that is a non-dangerous animal that is out of its habitat,' the zoo posted in a tweet.

'One of our clouded leopards was not in its habitat when the team arrived this morning and is unaccounted for at this time.'

The zoo tweeted that the missing cat, named Nova, was a 'serious situation,' but Edell said the animal posed no threat to humans. Police have now joined the search for the cat

Animals have escaped enclosures from the Dallas Zoo before. Most notably was in 2004, when a 340lb gorilla named Jabari jumped over a wall and went on a 40-minute rampage that injured three people before police shot and killed the animal.

The leopards are categorized as 'vulnerable' due to its habitat loss and poaching, according to the International Union for the Conservation.

There are 10,000 clouded leopards left in the wild across southeast Asia. They are small in stature and typically weigh between, 24 and 44 pounds, according to the WWF.

Dallas Zoo posted a video about Nova and Luna in March last year, in which zoologist Lisa Van Slett explained they had been moved to Dallas after being born at Houston zoo.

They were re-homed in the former primates' habitat at Dallas, which Van Slett says needed new perching, 'uprights' and platforms to encourage the arboreal cats' natural behavior of spending most of their time up in the treetops.

Speaking six months after the cats moved in, Van Slett described Luna as being 'a lot more comfortable' in her new surroundings, saying: 'She warms up a lost faster to the people around her.' 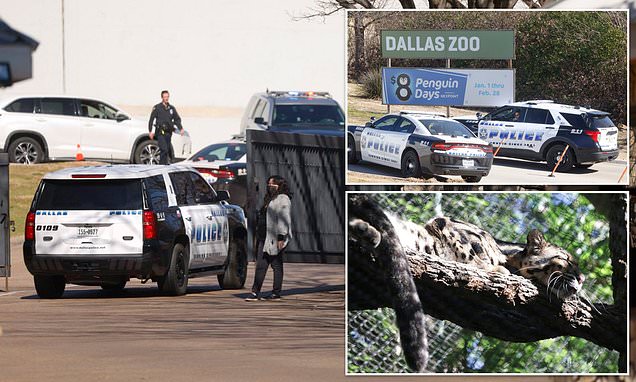 A clouded leopard whose disappearance prompted the closure of the Dallas Zoo was found Friday night, zoo officials said. We are thrilled to report we located clouded leopard Nova on-grounds at the Zoo this afternoon at approximated 4:40 p.m., a zoo spokesperson said in a written statement.2 hours ago

Dallas Zoo officials say they have found and secured the clouded leopard that disappeared from her habitat earlier in the day.an hour ago

3. Dallas zoo is forced to shut down after LOSING its clouded leopard

4. Clouded leopard is found at Dallas Zoo after spending - Flipboard