Barely a week ago Leon Bailey was crying his eyes out on the Villa Park turf after a miss that cost his team victory but here he was all smiles after inspiring Unai Emery’s side to a fourth league win in six.

Bailey’s stoppage-time error – he shot wide of an open goal at the Holte End – in the 1-1 draw with Wolves here left him distraught.

Yet he took a far more difficult chance here to give Villa an early lead and after Leeds had wasted numerous chances, Bailey’s blocked shot was headed home by Emiliano Buendia for a VAR-aided second, midway through the second half.


Substitute Patrick Bamford pulled a goal back to set up a tense finish but Villa held on.

No wonder Emery pumped his fists and screamed in celebration. His side had been under the cosh for much of the game but Leeds could not make their clever approach work count, and these are worrying times for Jesse Marsch’s team, with some away fans chanting ‘Marsch out’ in the closing stages.

They remain only two points above the drop zone and have just two wins from 17 in all competitions. Alex Moreno came on as an early substitute for his Villa debut after joining from Real Betis and made a goal-line clearance when his side were only one ahead.

Bailey ended Villa’s last league game here in tears after an astonishing miss in stoppage time against Wolves that would have given the home side the win. He then had a bad time in the shock home defeat by League Two club Stevenage.

Yet boss Unai Emery kept faith with the Jamaican and he was repaid after only two minutes. After Leeds failed to take advantage of a corner, Ashley Young found Boubacar Kamara with an excellent pass from defence.

Kamara carried the ball into Leeds territory before slipping the ball right to Bailey, who produced a superb curling finish from just inside the box.

Moreno was on for his Villa debut just 10 minutes into the game when Lucas Digne appeared to injure his shoulder. Despite the early blow, Leeds were the more fluent side and Villa ‘keeper Emiliano Martinez was nearly embarrassed by Rodrigo when he dawdled on a back pass.

Jack Harrison then escaped down the right and found Rodrigo, who took a second too long over his shot, allowing Douglas Luiz to rescue his team. Then Leeds screamed in vain for a penalty when Rodrigo and Luiz tangled.

Villa were still a threat on the break, however, and following another accurate pass from Young, Bailey should have found Ollie Watkins from an ideal position, only to overhit his cross.

That was the last of the action for Watkins as he became the second Villa player to withdraw through injury in the first half, as Danny Ings – scorer of the equaliser against Wolves last week – replaced him.

Ezri Konsa made a vital interception after Willy Gnonto had combined well with Brenden Aaronson on the Leeds left, and moments later Moreno kept his team ahead with a goalline clearance. Rodrigo had raced on to Harrison’s pass and rounded Martinez and Moreno raced back brilliantly to stop the shot.

Martinez then made a stunning save to stop Harrison turning in Luke Ayling’s cross from inside the six-yard, though the winger really should have scored.

Rodrigo had the ball in the net in first-half stoppage time but was correctly ruled offside, and referee Michael Oliver had to separate Emiliano Buendia and Liam Cooper after the Leeds skipper had wrestled his opponent to the ground.

Leeds continued to push at the start of the second half as Rodrigo robbed Mings and tore at the back line, setting up a chance for Harrison who again took too much time over his finish. It had been the story of Leeds’ performance: impressive build-up diluted by a lack of ruthlessness.

Villa’s tactic of inviting Leeds towards them seemed risk and just five minutes after the restart, Leeds boss Jesse Marsch was furious as Ezri Konsa took an age over a free-kick.

The home side reminded Leeds of their attacking ability, though, when Jacob Ramsey provided Moreno with the chance for a debut goal.

His shot was too weak and then at the other end, Martinez flew to his left to turn away Gnonto’s angled effort.

The game was opening up now and after Bailey had weaved past Pascal Struijk, Luiz fired just over the top when he ought to have hit the target. Rodrigo might have done better, too, than drag an effort into the side netting following a clever free-kick.

Marsch was becoming increasingly irritated by Villa’s delaying tactics and Kamara was eventually booked for timewasting just after an hour.

He need not have worried. Illan Meslier made a mess of Bailey’s drive and even though Buendia was given offside when he headed in the loose ball, VAR overturned the call. Leeds were losing a little heart by now and both Moreno and Ings squandered good opportunities.

Bamford had been brought on soon after the second goal and was on hand to score from close range after an outstanding display of pace and vision from Gnonto on the left.

Re-live the action in Sportsmail's live blog for the Premier League clash between Aston Villa and Leeds. 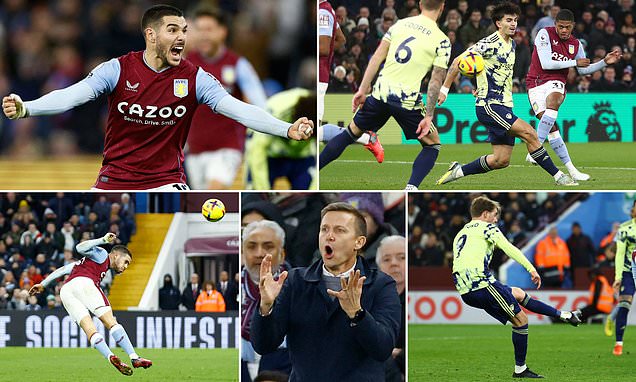